Around 150 people turned out once more on August 2 outside the Havelock town hall to protest the proposed asphalt factory on Covey Hill brought forward by the Groupe Chenail Inc. The citizens, mostly from Havelock but also from as far as Huntingdon and Elgin, were not allowed to enter the town hall, and to date have not been given access to the sound recordings of the council’s meetings, which have been requested repeatedly since 2020, when access to council meetings was barred because of COVID-19 restrictions.

As soon as they learned of the possibility of this industry coming to their area, Les Amis du Covey Hill, a coalition of concerned local citizens, was rapidly organized and has been communicating with the council and confronting them with their concerns.

On July 7, the council and the mayor released a statement published by The Gleaner saying that they would “oppose” such an industry on their territory. At the formal adoption of the statement on July 20, council changed the verb to “does not recommend.” This wording, however, seems to have been enough to get the point across to the most important decision-making body, the CPTAQ, which has rejected the current application and closed the file.

Actual decision making about such controversies under Quebec provincial and municipal law is complex, to say the least. The strongest actors, according to various sources including former municipal inspector (Franklin and Dundee) Luc De Tremmerie, are the individual town councils and the CPTAQ. The Ministère de l’environnement (recently changed to the Ministère de l’environnement et la lute contre les changements climatiques, the MELCC) has a role in terms of forbidding such-and-such an industry; but its approval of an application does not mean it can automatically go ahead. As for the MRC, De Tremmerie explains, “It is not a decision-making body” but only oversees the zone management plans for the region.

In this case, the MRC told the Chenail group back in 2019 that the proposed factory did not conform to the MRC’s zone regulations. Réal Chenail’s specialist lawyer, Richard Brunet, went before them again in 2020, citing legal precedence that the factory would constitute only “transformation” of the original extraction industry. At that point the MRC agreed that such use of an “extraction-only” zone could be in conformity with their zone plan. However, as De Tremmerie points out, “No official decision was made, because the project had not yet been submitted to either the CPTAQ or to the village, and there has been no further development from the MRC.” He adds that in the case of opposition, “It would be up to the courts to determine the exact meaning of this word,” since it could be argued that an “extractive” quarry producing petrochemical-based asphalt is a radical “transformation,” involving tonnes of noxious chemical additions, truck traffic to feed the process, and the production of potentially explosive or polluting products.

Pierre Caza, current director general of the MRC du Haut-Saint-Laurent, says it’s important to understand that the MRC and the villages “only express legally binding issues through resolutions or regulations passed by their councils. What was reported in the media was the kind of informal reunions we regularly have; many people come to find out what our rules actually are. But our official position in terms of approvals is only made by voted-on, published resolutions or regulations, and we haven’t done either in this asphalt situation.”

This means that the Chenail group did not obtain what citizens might consider “permission” from the MRC to operate. It merely consulted with the MRC as to whether they were in conformity to make the next step. Caza says, “These things are very much in local hands, as long as the overall zoning plan is respected.” He added that he was “very happy to have this opportunity to set these facts straight in The Gleaner. This has been more a problem of communication than of management of the territory.” 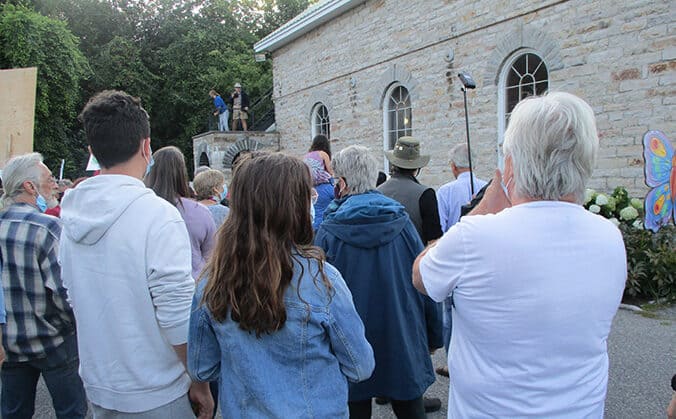 Caza is partly referring to the fact that many local news outlets ran with an unsourced statement that the project had already obtained “permission” (“consentement” in their articles) from the MRC and the MELCC. A story referring to the reaction of Havelock citizens also implied that the consent of the municipal council was the last step to take before going ahead, with no mention of the important role of the CPTAQ. This misleading information alarmed the citizens and fed their anger at the August 2 confrontation.

That said, the protest overall was noisy but friendly, with mostly masked attendees waving creative signs, neighbours chatting, and small children, dogs and grandparents attending. But this time there were two police cars with six officers present, one of whom physically intervened when a few people started knocking on the town hall door that had once again locked them out. The police did permit the group to move to the window area so they could make noise and demand answers.

After more than an hour, the council permitted one spokesperson from Les Amis du Covey Hill, Michel Menard, to enter. Soon after, he emerged alone with the letter from the CPTAQ dated July 28, that seems at last to provide some clarity: declaring the quarry project “inadmissible” due to the Havelock Council’s opposition, and closing the file.

This was received as good but not final news. De Tremmerie doesn’t think this is over and says that the Chenail organization will probably not appeal the CPTAQ decision, but “will likely try to present a new demand.” He wonders whether the town “is going to take legal action against Chenail at the municipal court level for two derogations [moving in building equipment in spite of no permit, therefore illegal use of the site].”

Pascale Bourguignon, one of the activists, says that “Since our constructive meeting with council on July 20, we’ve been asking them about sending inspectors, looking into fines for illegal use. We are also working on a record of the entire dossier, including a chronology of the various attempts to get this industry started. “We want to send it to the CPTAQ, so if the Groupe Chenail Inc. wants to contest or re-apply, the CPTAQ has a coherent document listing all the problems it could cause, and all the steps that have been taken by the parties involved so far.”

She adds, “We’ll give it two weeks before re-contacting the council. If we see any problems, we will send out a new call to our supporters, because this type of community organization has obviously helped to empower us to protect our region, its water, wildlife and our current livelihoods, however difficult the situation.”

Update: CISSSMO ramping up vaccination campaign in the Haut-Saint-Laurent

Honeybees, butterflies, and toddlers, oh my!