During his daily address today, Premier François Legault did not mince words. He announced he was sending a message to all police bodies in the province, from the Sûreté du Québec to local and regional forces, to be less tolerant of those disobeying public health orders to avoid indoor and outdoor gatherings and for all non-essential businesses to be closed. The Premier suggested there had been thousands of calls reporting people not following government measures. “This is very serious,” he said, while reminding Quebecer that fines for breaking these measures will range from $1,000 to $6,000. “There are lives being put in danger,” he added. “If we continue to have gatherings and non-essential companies operating, well, there will be deaths.” 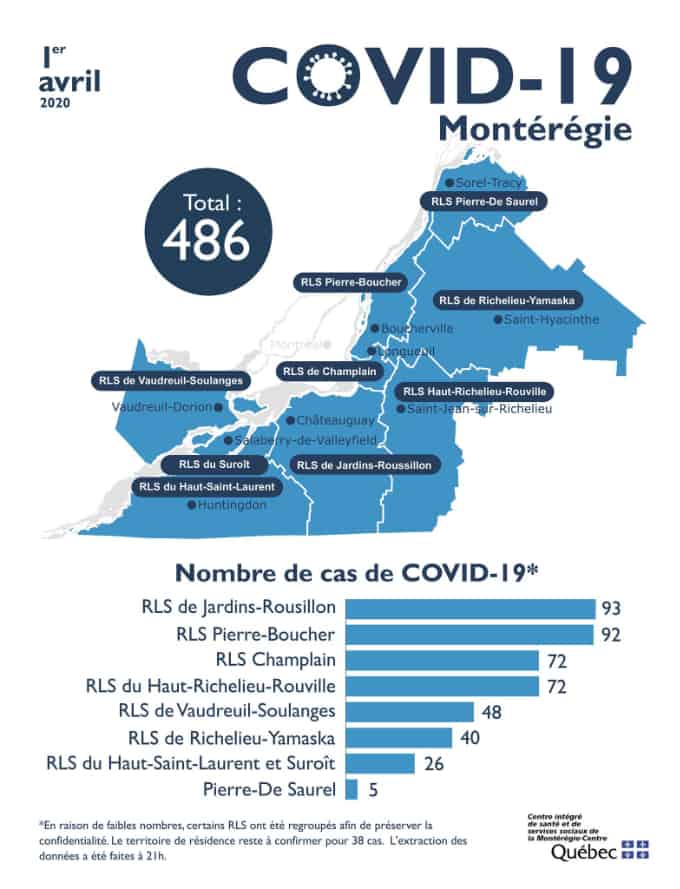 The Premier then confirmed three new deaths across the province linked to COVID-19, bringing the total number to 36. The number of positive cases climbed by a further 907 individuals to 5,518. There are now 365 people hospitalized with the coronavirus, of which 96 are being treated in intensive care units. The number of positive cases for the Montérégie region jumped by 64 to a total of 468. Only two new cases were announced in the Haut-Saint-Laurent-Suroît health region for a total of 26, while the number of positive cases in the Jardins-Rousillon health region rose to 93. The Montérégie public health authority has also suggested that for now they will not be publishing the number of people affected by COVID-19 per municipality as there are too many small municipalities in the Montérégie with very few reported cases. Making this type of information public could inadvertently identify individuals affected by the disease or create a false sense of security for those living in the areas in question.

Legault confirmed the province has enough ventilators to cover the need according to even the most pessimistic peak predictions. There is still a shortage of gloves and masks, however more orders should be arriving shortly. Health care workers are currently using hundreds of thousands of masks per day and more than a million gloves.

During a press conference this afternoon, the President of the Treasury Board, Christian Dubé, announced nearly 300,000 health care workers will be seeing an increase in their paycheck to demonstrate the government’s appreciation of the work they are presently doing. Front line workers will see an increase of 8%, which will impact around 69,000 workers. All other health care workers will be compensated with a 4% bonus. In both cases, the additional funds will be retroactive to March 13. The measures are expected to cost around $287 million altogether.

Schools will no longer be opened to allow parents to collect essential items for their children. It had been previously announced that parents would be able to make arrangements with the school to recuperate personal items belonging to their children, however Education Minister Jean-François Roberge announced on Wednesday that all such operations were to be immediately suspended at the request of the Direction de la Santé Publique (the provincial public health authority).

Globally, the cases of COVID-19 have now reached more than 1 million. In Canada, there are now more than 11,000 positive cases, of which almost half are in Quebec.