A fire that significantly damaged the O’Connor Building in Huntingdon on April 19 is now under investigation by the Sureté du Québec (SQ).

Sergeant Audrey-Anne Bilodeau, a spokesperson for the provincial police, says the fire’s origin appears to be suspicious. Officers and a fire scene technician were seen sifting through the damage the following day. Bilodeau confirms that three suspects between the ages of 13 and 15 have been questioned by investigators concerning their potential involvement in the fire.

The Huntingdon fire chief, Marc Voyer, agrees with the SQ’s assessment of the nature of the event. Abandoned since 2015, the building’s electricity has been shut off for years.

Voyer says the fire call came in at 5:03 p.m. By the time firefighters arrived on scene minutes later, violent flames and thick smoke were already pouring out of windows at the rear of the building. “I was sure we were there for the night,” says Voyer, who admits he was concerned they might lose the historic building altogether. 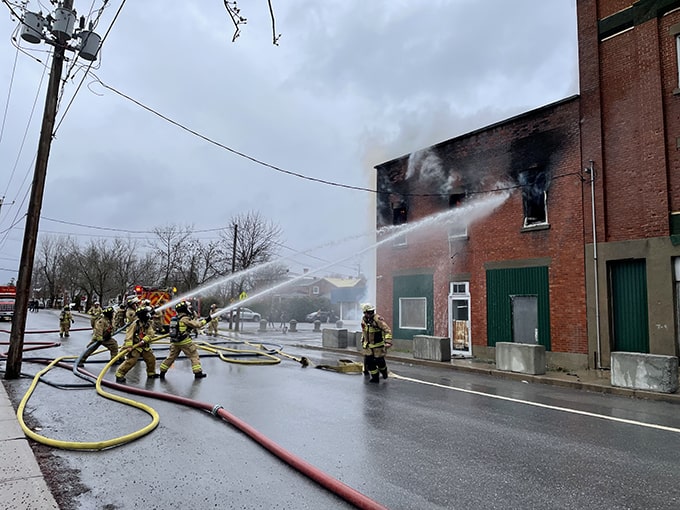 Fire departments from Huntingdon, Godmanchester, Hinchinbrooke, and Sainte-Barbe responded to the general-alarm fire, while ladder trucks were sent from the Chateaugay Brainardsville Fire District and the Malone Callfiremen departments in New York State.

Over 90 firefighters were involved in the operation, which ended around 11 p.m.

“We were defensive right to the end,” says Voyer of the response, which involved dousing the building from all angles, including the roof. Windows were shattered to allow water to penetrate the building. “We went in at the end to tap out all of the hot spots,” he adds.

There were no injuries reported, or fire damage to nearby buildings.

A future for the building

The O’Connor Building, which was listed as a heritage building in 2009, has been left by successive owners to fall into disrepair. Built in 1915 by Dennis James O’Connor in partnership with his brothers Pat and Walter – who were all part of the O’Connor Brothers, a prosperous road construction company in Huntingdon – the building originally included a restaurant, a post office, and other businesses including a movie theatre.

According to the Quebec Cultural Heritage Directory, the building was modified over time, particularly in terms of openings and entrances. Two annexes were also built against the rear wall, which is where the fire took hold. The last major restoration of the building took place in 1960.

Huntingdon Mayor André Brunette insists there is very little the town could have done to prevent such an outcome. “It is a private property,” he says, explaining the town has done what it could to maintain the building, going so far as to declare it a threat to public safety last July when a gaping hole was discovered in the roof along with substantial damage to the building’s structure.

The current owner, Howard Greenspoon of Montreal-based Greenvest Enterprises, Inc., a holding company that recently repossessed the building, says he was shocked and upset to learn of the fire. “It is pretty unfortunate. We were very close to starting the restoration of the building,” he says, acknowledging the fire represents a major setback.

Greenspoon says plans were in the works to inject over $1 million into restoring the building, with around $20,000 already having been spent on cleaning it up. “Basically, it is a gut job,” he says, noting the heritage status of the building requires the exterior façade remain unchanged. The fire damage could add an additional $300,000 to the already pricey project.

Despite this, Greenspoon insists he still wants to go forward. “We just have to see what we can do,” he admits. “We are not about to walk away.”