We are a community of exceptional people in the Chateauguay Valley, and when something like a global pandemic breaks out, there are those that simply go the extra mile to remind us how lucky we all are to be living here. From social media accounts designed to seek out those in need, to the production of a small token of hope or the sharing of skills, the COVID-19 crisis has brought several stories to light of generosity, selflessness, and caring. Here are just a few.

Taking the concept of a social network to new heights, locals Chantal Hortop and Brandon Borland launched the Facebook group Valley Neighbours Helping Neighbours on March 18 with the goal of sharing and organizing community resources in response to COVID-19. The page welcomes requests for aid or support and allows members to share opportunities and any events that may be helpful to the community. 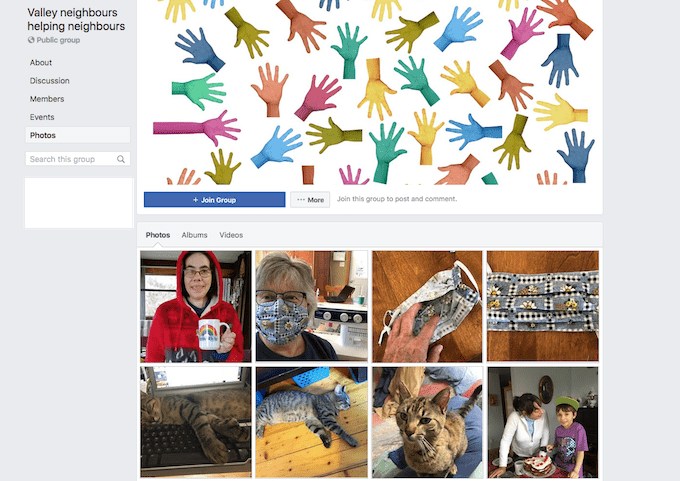 “Chantal set up this platform and people kind of made it what they need,” says Borland, of the just under 300 group members and the evolution of the page. “In the beginning we were contacted by people who really did need help,” he notes, explaining they are now helping about eight to 10 people in a regular way. For example, he says, a Dewittville resident’s family member who lives outside the region reached out to request that someone check in on her brother and his young family. A single post to the group about the need for some groceries quickly raised several hundred dollars and they were able to supply grocery gift cards, and even all the makings for a 13th birthday pizza party.

Another example of the group’s work involves a local resident on a respirator “who can’t get sick,” says Borland. She reached out and he has been helping her with groceries ever since, even going so far as to convince the owner of the local IGA in Huntingdon to allow him to buy the entire stock of low acid orange juice despite limits on purchasing, as this is the only juice she is able to drink and it was being discontinued. “It means a lot to these people,” Borland says, noting that without the safety network provided by the Facebook group, “they would be having a tough time.”

He suggests, “Everybody is looking for a way to help, they just don’t know how. Some people have time, others don’t, but they all want to help.” He personally credits having been influenced by his family’s involvement in the church as well as 4-H for his desire to become involved with the community. “You just feel like you have to,” he says with a laugh. “You just want to do it, to get it done.” And certainly, this group is getting it done for its followers, and for the grassroots community of helpers it has brought together.

‘We are all in this together’

For Jesse Roskies of The Valley Workshop, a woodworking boutique specializing in custom-made products, the government-imposed public health measures meant shuttering his storefront in Ormstown to the public. “I decided to do the only thing I could,” he says of the small pin he designed with the words “We are all in this together” inset in the shape and colours of the Canadian flag. “I had been wracking my brain to find something that I could offer the community to band together,” says Roskies, who has now created and given away over 800 of these pins from outside his shop on Lambton Street in Ormstown.

The pins are so popular they have been mailed across the country by local residents, and he has even sent an envelope full to Prime Minister Justin Trudeau with a letter thanking him for his work through the pandemic. “As insignificant as a piece of plastic is – it is something,” Roskies says, suggesting people thank him on a daily basis as he restocks his display table. “It is very much reflective of the sense of community the design of the pin was meant to encompass,” he says.

For Huntingdon resident Christina Fasoula, the shortage of masks was also a concern. “I thought there was a need for masks, and I had material,” she says, noting her first thought was for her neighbours. An accomplished weaver, she hauled out her vintage sewing machine and found a pattern online for face masks made of cotton with a bonded or non-woven fabric centre. Soon word got around that she was producing masks and she has not stopped since. Each mask takes around an hour to make. She has delivered some to the Residence-Elle shelter and several local businesses, donating them especially to those who work closely with people.

And now, as the Centres for Disease Control in the United States and more recently the Chief Public Health Officer of Canada, Dr. Theresa Tam, have publicly advised wearing masks as a way of reducing the spread of the virus, she has more requests than she can fill as a mom to young children now home from school who is sewing in her spare time.

“Right now, we all feel powerless,” Fasoula says, suggesting that the ability to comfort someone by offering them a face mask is empowering. She photographs and posts the images all of the masks she creates to her social media account as each one is created with someone specific in mind. Her timeline now serves as a colourful reminder of this time and of her exceptional dedication to the people of this region.