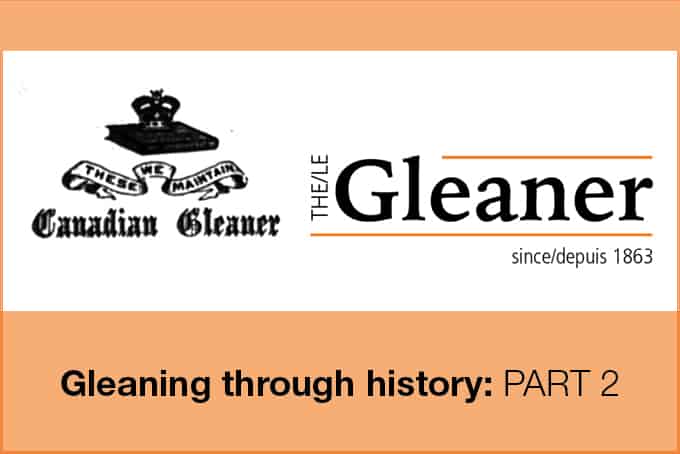 It was appropriate to begin a new era for the newspaper with a new regional name, the Huntingdon Gleaner. As the Valley became more established and prosperous, closer-to-home news became plentiful and was prioritized, and local advertising flourished as a result of business growth.

The paper remained in the Sellar family until 1961 and Adam Sellar was the last family member to run it; under his leadership in the 1930s it gained prestige and won numerous national awards for content, appearance, and overall quality.

While the editorial content of the Gleaner became more objective and less incendiary than in the early years, the paper itself grew larger with all the increased advertising and proportionate copy. The office and printing plant on Chateauguay Street along the river branched out into job printing as well.

When the larger, fuller Gleaner went to broadsheet, it had to be printed on larger presses and therefore jobbed out, but the presses in the Gleaner building continued to pump out smaller-format items such as invitations, fair programs, booklets, and stationery. These jobs included the printing of the smaller Fort Covington Sun in later years.

Early on in Sellar’s time, the presses would have used moveable cold type in the letterpress process. Typesetting involved manually placing each lead letter; upper-case and lower-case letters came from upper and lower typecase drawers respectively. Typesetters had to “mind their ps and qs” as they built up blocks of type.

Later, molten lead was used in the hot-type process, linotype; but the more modern offset process is much quicker and more user-friendly: more photography and chemistry, less lead poisoning.

Changes in social weather and editorial approach meant that Keith and Margaret Howden, who bought the Huntingdon Gleaner from Adam Sellar in 1961, introduced some French material into its content. Later, a small self-contained French section was included in 1964 and it was so well-received that La Gazette, a small Valleyfield francophone publication, was acquired and incorporated as a section of the Gleaner in 1971.

Judith Taylor, hired as a journalist by Howden in the early ‘70s, says that the almost 50/50 anglophone-francophone balance in the area’s population at that time influenced the flavour of the newspaper: “The fact it was a rural area meant the general atmosphere was created by the shared needs and difficulties of farming, not so much by the differences of language.”

Shortly after Taylor was hired, Alan Randal was brought in as editor. “He came to the Gleaner as a former WWII war correspondent, and he had risen to be high-up in the operations of the Montreal Gazette. He had big-league experience and was a very professional newspaper person; he taught me everything, from covering news to how to write headlines and cutlines, and do layout,” she recalls.

Howden stepped down by the mid-70s, but his witty writing of This and That is evident in the Gleaner Archives column. Randal steered the editorial ship until late in the decade, and Taylor went on to be editor of the Gleaner for many years.

Another long-standing member of the staff was Cyril Alary, a Huntingdon boy and a very social fellow who was the French journalist and man-on-the street. As well, Ramona Rougerie was a mighty translator, proofreader, journalist, and editor. The name of the French section, La Gazette, was changed to La Source in the early 90s. It is now Le Gleaner.

Production of the paper in the ‘60s and ‘70s was very different from today. Presently, all content is written, compiled, and directly laid out on modern speedy computers, and sent off over the internet to be printed. Back then, all copy was either handwritten or typed on typewriters. It was then entered by typists into a phototypesetting system, the Compugraphic, which could contain in its analogue brain a few different fonts set to size.

Copy was typed into the first component, which coded it into perforated paper tape; the tape was fed into the second component, and the copy was phototypeset onto strips of special paper. These were developed, dried, and run through a “waxer” to put sticky lines on the verso. This allowed the copy to be pasted, or set, in columns on broadsheet paper masters, and this was how paste up was done – it was literally pasted. Headlines were typeset separately, as were ads; Taylor says lined borders were sometimes hand-ruled in the mad rush of deadline.

A key person during this era was the darkroom wizard, Bobby Stone. In the days of film photography, at a weekly paper – which the Gleaner was – the darkroom manager had a demanding job. Photos were taken by journalists on film cameras; the black-and-white film had to be extracted, developed in chemical baths to become negatives, dried, and then contact proof sheets were made so positives could be chosen for each article and marked for cropping.

The final prints were then made in the darkroom and dried. When the paste up was complete, Stone would create huge negatives of each broadsheet page to be made into plates and sent off for offset printing, for every edition, every week.

Elizabeth Elliott, who started at the Gleaner in 1975, remembers how those vast negatives were hung to dry on “clothesline-like affairs”; they were then “opaqued” or touched up by hand with a brush. Elliott operated the Compugraphic, which involved, she says, “typing blind.” Typists entered all the copy without being able to see what was being typed, as there was no screen, no paper. They had to be extremely accurate, and she explains how she had to “learn how to [decipher] each correspondents’ handwriting, with all the editors’ markings, too.”

As the Compugraphic couldn’t function at temperatures over 75 F, its dedicated room was the only one with air conditioning. Elliott jokes, “That wasn’t in there for us – just for the machine!”

Elliott also worked the “Headliner” which created larger lines of type, and she did paste up along with David Anctil and Eric Belanger, who was a jack-of-all-trades journalist at the time. She ran the “Addressograph” which stamped mailing labels, and she helped in the print shop doing document assembly. As production evolved and moved, she moved along with it; later, she continued as a typist and more, for over 20 years.

While copy was put on the pages by way of numerous photographic processes, actual photos “make” a newspaper as they attract the eye and impart information immediately. The first camera Taylor used at the Gleaner was a double-lens-reflex 35-millimetre and a handheld flash with a massive, heavy battery pack that she had to lug along on her assignments. She later bought a Minolta single-lens-reflex camera, which was much lighter but still an elephant next to todays’ picture-takers.

Alary was a busy photog for the paper, snapping shots as he did his news-gathering rounds. Photo whiz Phil Norton appeared on the scene as a freelance photographer; he went on to be editor on and off over the years. But all Gleaner journalists took their own photos; it was part of the job.

Kid memories of the 70s newsroom

The smells of printing ink, wax, cigarettes, and photo chemicals were pervasive and not unpleasant in the old 70s Gleaner building. The rattle of typewriters, the shrill summons of the telephones, many voices, and the racket of the presses in “the back” formed the ambience of the news office. For a kid visiting, an exciting highlight was to venture back (with permission, and some apprehension, because the foreman could be fierce) into the print shop for a 10-cent soda from the old vending machine, or to sit in a corner of the newsroom with a freshly printed colouring book given by the kindly publisher.

Those noisy presses would remain on-site until the newspaper’s headquarters were moved to the O’Connor building in 1986, when the hum of computers, electric phone buzzers, and the chant of desktop proofing printers became the background music.

You just can’t put a good paper down

A country, a region, and a newspaper defined