Jean-Pierre Ranger, the owner of Parc Safari, has established a history of firsts in Quebec. The innovative 78-year-old continues to break ground, as Parc Safari celebrates its 50th anniversary with the launch of the first all-electric safari bush trucks, a zero-emission option for the Safari Adventure.

Since opening in 1972, Parc Safari has welcomed 15 million visitors to its expansive grounds in Hemmingford. A rarity in the world of zoos, Parc Safari is home to around 300 animals from the Americas, Asia, and Africa that live in natural groups or herds within spacious enclosures. The park’s zoological initiatives contribute to the reproduction and protection of endangered species such as cheetahs, African elephants, arctic wolves, and giraffes. The zoo has previously sent a guar to the Singapore Zoo and white wolves to several European countries.

In 2020, the park reintroduced two cheetahs who were born in Hemmingford to the Imire: Rhino and Wildlife Conservation reserve in Zimbabwe. “There were tears,” admits general manager Véronique Ranger, of the successful rewilding project. “It is crazy to see them thrive, and they were born here!” she exclaims.

“Our little institution is so big, but it is so small,” she says of the zoo’s dedicated team of permanent year-round employees, adding that they are like one big family. “It is one of the big strengths of the park.” 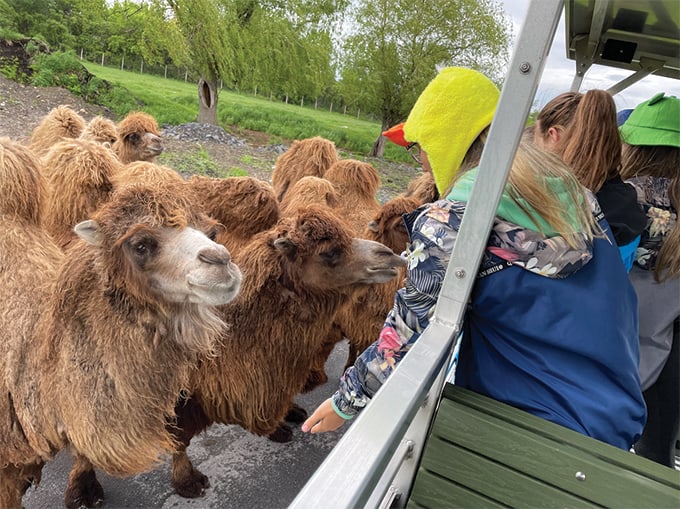 Having grown up there, Ranger says she was lucky enough to get to know the park from the inside. “You get to see what the challenges are, and how the visitors react to the place,” she explains, noting that while the park has changed over the last 50 years, development has accelerated in the last 20 years. “There is so much to be taken into consideration now,” she says, pointing out how animal rights have become so important to the park’s management.

The drive to innovate was passed down from her father, and now that renovations to the water park and other installations are complete, she says the next big projects will be animal oriented and “even more exclusive and interactive.”

The June 6 introduction of the seven electric bush trucks will offer visitors an up-close perspective while travelling the Safari Adventure. The eco-friendly fleet is in step with the park’s values; over the past five decades, zoo facilities have been modernized to include geothermal energy, rainwater recovery, solar walls, and bio-safe construction. And while the past two seasons were difficult due to the pandemic, Jean-Pierre Ranger says he has no concerns for the institution going forward.

“We will continue to work with zoological institutions in urban places where they do not have the space to have herds,” he says, noting the park will continue to contribute to the reproduction of endangered species while ensuring the animals live in the best possible conditions outside of their natural habitats.

Ranger also plans to expand on the educational component of the park. He is especially proud of the new Discovery Pavillion, the result of a collaboration between McGill University’s Redpath Museum, the Municipality of Sherrington, and the Club de Minérologie de Montreal. The exhibit features over 600 mineral samples, 200 fossils, 100 insects, and hundreds of different sands and shells. Ranger says it is a place of playful discovery, where sparks of curiosity and exploration may be lit in young minds.

A country, a region, and a newspaper defined