An area of 88 hectares of land, which has been in the family of local artist, John Ryan, for generations, has been acquired and deemed a conservation site by the Nature Conservancy of Canada (NCC). The NCC, as stated on the website, works “to protect our country’s most precious natural places. Proudly Canadian, we empower people to safeguard the lands and waters that sustain life.”

Ryan’s family has been on this land since settling there in the early 1800s. It has remained in the family throughout various farming phases. Originally, it was mainly a sheep and livestock farm. In the 1880s it became a dairy farm and remained as such until the 1960s when the cows were sold, and the family started renting out the land. Its natural diversity, which includes forest and wetland, remains relatively undisturbed.

Having the land assessed was something that Ryan, his wife, Audrey, and his siblings wanted to do for a long time. Ryan owned this land with his brother (Michael Ryan) and sister (Joanne Cunningham) and he says that having it bought by the NCC was “something we were looking at doing someday, and it seemed like a good time to do it. We were all getting older, and it was time to start looking.” When they began the process, Michael Ryan’s health had begun to worsen; unfortunately, he passed away shortly after the transfer was completed.

A special pocket of land

A conservation site has great importance, both ecologically and to the identity of a region. Ryan called the environmental importance an “obvious one,” stating that, currently, we are all much more aware of the importance of protecting nature and its diversity. 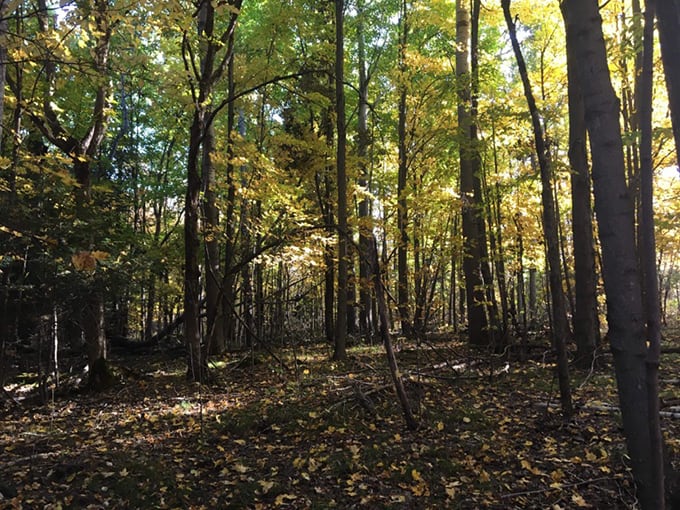 In terms of the region, he explains that the land has been minimally disturbed over the years and is likely very close to what it was decades ago. “There have been times where some wood has been harvested, but it’s not a great wood loss or for commercial wood harvesting.”

Ryan mentions that the NCC pointed out the land is “smack in the middle of an island of forest in Godmanchester.” He goes on to say that while much of the greater area has been cleared and developed for larger farms, his land creates a special pocket within the forest. It will remain home to varied wildlife and will help maintain native ecosystems, such as wetlands. Ryan describes how these are “very sensitive, especially with farming techniques today. Wetlands are important in an ecological sense because they filter the water, and they absorb water from heavy rains. And they house a lot of wildlife.”

A magical place when the sun comes through

Ryan is a well-known local artist who has also created The Gleaner’s single-panel cartoon for decades. Growing up in the Valley, Ryan is accustomed to scenic views. On his land there are about 25 acres of small fields and bush, and because of the variety of trees, shrubs, and grasses in those areas, there was a lot of opportunity for the artist to observe and “play with sunlight” in his paintings. “There’s a lot of shade, and you’re in kind of a magical place when the sun comes through,” says Ryan.

For anyone interested in having their land preserved with the NCC, there are different programs available. Ryan explains that, in his experience, the organization is “open to talking to anyone who has land they think might be of value.”