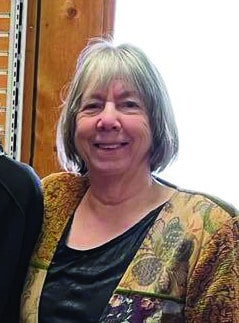 Passed away suddenly at home in Ormstown on April 21 at the age of 68, Joan was a loving wife to Steve Tucker, devoted mother to Jesse, step-mother to Linus (Lorelei), Calvin, Clayton, David, and Randy, grandmother to Lexie (Andres), Zachary (Kelsey), Skye, and Thomas, sister to Steve Darlington (Joanne), and a dear friend to many.

After a youth in Pointe Claire and summers in Dunany, Joan moved to Ormstown to pursue a career in education which spanned 14 years largely spent teaching English and drama at Chateauguay Valley Regional High School. When Jesse’s early birth required an extensive stay in the Jewish General Neonatal Intensive Care Unit, Joan left the classroom behind to focus on her son and the family business J.T. Sport. Along with husband Steve, in 2016 Joan was recognized by the Canadian Motorcycle Hall of Fame for their contribution to vintage motorcycling.

In lieu of flowers, a donation to the Jewish General Hospital Foundation would be appreciated. A private service will be held at a later date.

So sorry for your loss. Joan was the coolest of teachers and always available to lend an ear. I’ll miss seeing her.

My sincerest condolences to the Family.

If you’d like to make a donation in Joan’s memory, you can do so via this link: https://jghfoundation.crowdchange.co/14038/page/283066