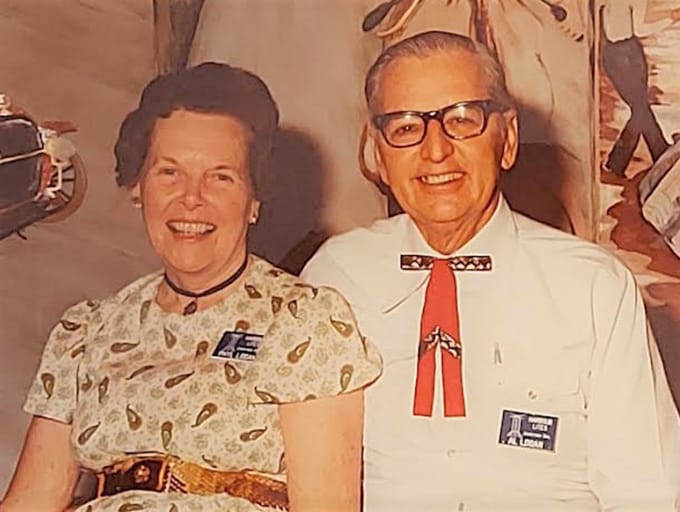 Phyllis Jane Logan (nee Anderson) passed away  on Sunday, March 12, 2022 at  St. Lawrence Lodge, Brockville.  She was born April 6, 1921. The eldest daughter of the late William Anderson and his wife Melinda (Logan) Anderson of Howick, Quebec. Phyllis was raised and received her early education in Howick, Quebec. During her high school years, she was involved in many sport events, and enjoyed playing on a trophy winning softball Team. Later attended Business College in Westmount, Montreal, and was employed by Bell Canada Office in Montreal. Following her marriage in 1944 to Allan Logan, she was transferred to Bell Canada Office in Ottawa. Following her husband’s discharge from the RCAF, they took up residence in Crawford Park, Verdun. PQ.

In 1954 the family, with son Roy & Linda, moved to Brockville. Phyllis was active in the Ladies Auxiliary of the Boy Scouts Movement, Home & school Association and taught Sunday school for many years at First Presbyterian Church, Brockville. In 1969, she became the “HI Neighbour” manager-hostess for Brockville area and for 26 years she welcomed newcomers on behalf of city Officials and merchants, to their new home and surroundings. Phyllis & Allan enjoyed many years of modern square & round dancing and were members of several clubs as well as members of the Ottawa Square & Round Dance Association. In 1973, Phyllis & Allan moved to their riverside home in Johnstown, Ont. where Allan became a Caller in the square dance movement.  Phyllis was active in the Johnstown United Church and president of the United Church Women. Her interests included boating along the river with Allan, cross-country skiing and taking holiday cruises and dancing. Her hobbies were needlepoint, knitting, painting, playing card & board games (scrabble, checkers) but main interests remained with her grandchildren, Marc, Layna, & Shawn and was very proud of their accomplishments over the years. In 2001, they sold their riverside home and moved to Brockville taking up residence in the new Bridlewood subdivision. Here she enjoyed gardening, new neighbours and short trips south. She returned to her home church, the Brockville Presbyterian Church, where she had been a member for many years. After Allan had passed away, In 2009, Phyllis moved into the Wedgewood Retirement residence and then into St. Lawrence Lodge and spent many years in the facility’s care.  She was well loved and will be missed by all who knew her.

Family and friends are invited to the Irvine Funeral Home, 4 James St., E., Brockville, ON, Friday, April 8, 2022 from 1-2 pm. A celebration of Phyllis’s life will be held in the chapel at 2 pm followed by a reception. Interment will take place in the family plot in Georgetown, Que. at a later date.The family has requested that masks be worn at all times due to Covid 19; as well as each guest must register online at www.irvinememorial.com or by calling our office 613-342-2828 between 9-4:30 pm. Memorial donations to the St. Lawrence Lodge – Palliative Care, Brockville General Hospital – Palliative Care or the charity of your choice will be gratefully acknowledged by the family.