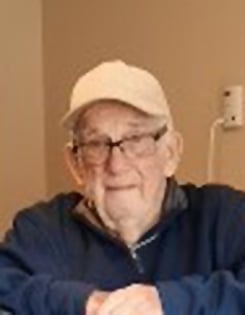 Predeceased by his parents, John Daniel Hamilton and Helen Elsie (McWhinnie) Hamilton, of Ormstown, Quebec. Also predeceased by his older siblings, Gladys, Bruce, and Dalton. Gord is survived by his sisters-in-law Rhoda, Olive, and Judith, as well as nieces and nephews.

Gordie was hired by Northern Electric, in Montreal, two weeks after his eighteenth birthday, and did machine piece work for a few months before moving to wiring operations on telephone equipment. During this time Gordie heard about job openings in the installation department. Since this job involved travel, with paid living expenses, he applied. Gordie laid telephone cables, and installed equipment, in different places in Canada, including Churchill, Manitoba, before getting a desk job and becoming a quotations specialist, for the rest of his career. He retired from that same company, forty years later. After they’d both retired, Janet and Gord travelled all over the world on many wonderful vacations.

In his younger years, when he and his family lived in Ormstown, Gordie enjoyed hunting and fishing, in his spare time.

Janet and Gord were long time churchgoers and members of Duff’s Presbyterian Church, in Puslinch, Ontario. They both made many friends there, over the years, and were greatly enriched and blessed to be a part of the Duff’s church community.

A memorial service for Gord was held at Duff’s Presbyterian Church, on Saturday, December 3rd. Interment will be held at a later date.

Memorial donations may be made to the Canadian Cancer Society in Gord’s name.