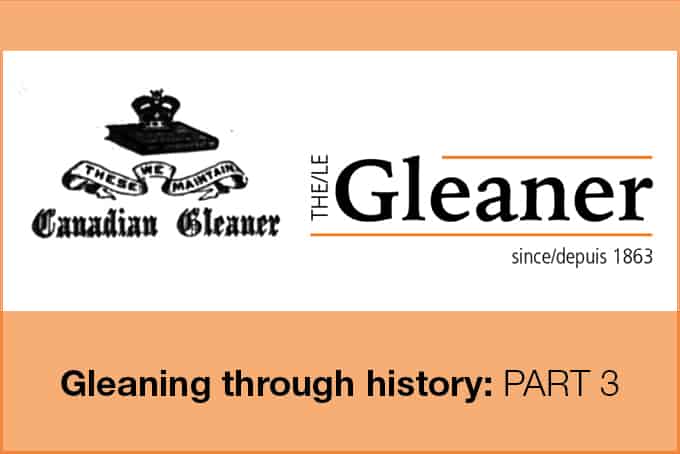 In the mid-seventies, the newspaper was taken over by Roger Daoust and Claude Pilon. Daoust had been doing advertising for the Huntingdon Gleaner along with André Castagnier for a long spell, and he was the paper’s vice president for twelve years.

Throughout the following decades, the Gleaner was acquired by various media chains including Les Hébdos Montérégiens, Québecor Media, Transcontinental Media, and Gravité Média. The changes allowed the paper to survive in a time of gobbling corporations, big media control, and the invasion of unlimited internet content, but it did so with difficulty.

That the paper survived at all during that time was due to the devotion, tenacity, and hard work of long-time general manager Sheri Graham, who fought like a tiger to keep the Gleaner going. According to current news editor and journalist Sarah Rennie, Graham is “the only reason it survived. Sheri was the rock that held everything together.”

Belonging to, and in,  the community

Graham says the important thing was “putting out a week-to-week paper for our readers,” and that she “took pride in her ability to hire and build a great dedicated team.” She tells of frequent discussions with publishers as she tried to convince them of the value of the community paper and its staff, and that a community paper is not the same as one with free distribution. That the Gleaner was compromised during that time was upsetting for the entire team. Graham recounts how she told some senior management, “The Gleaner should be a trophy on your mantle!” – instead, it was under constant pressure to reduce staff and costs.

Radical changes in production meant that paste up and graphics were farmed out to large printers, and the internet made correspondence and file sharing quick and efficient. But keeping the Gleaner alive and relevant was increasingly challenging.

During this survival struggle, the importance of the newspaper in the community, and the dedication of staff who “kept coming back,” were especially apparent when the Huntingdon textile mills closed in 2004-05, throwing the town into dark turmoil. Phil Norton says, “I am probably most proud of my return when the [paper] did not have an editor and Huntingdon was in an economic downturn.” Rennie recalls, “The Gleaner continued to be “an important source of news, and a way of coming together during that terrible time.”

Many, many people behind it

The paper continued to strive, and what was inherent, though not immediately evident in changing times, was that it was truly a fixture and was destined to remain so in the face of difficulty. Its unwavering identity as a Valley institution, which developed simultaneously with the region in a kind of symbiosis, fueled the fight to keep it going.

While it was sometimes taken for granted, and even removed from Huntingdon for a period, there were many, many people behind it who, for years, cared deeply about it – not just as a workplace, but as an integral part of their lives and identities.

Nonetheless, despite best efforts, the Gleaner – having finally been reduced to a small insert in a larger francophone publication – ground to a halt in 2018. That was when its owner, Julie Voyer of Gravité Media, reached out to the Chateauguay Valley community to see if there were any parties interested in taking it on. Voyer was from a small town herself and was looking for a solution for the Gleaner. According to Rennie, “She offered it for one dollar to the group of volunteers brought together by Hugh Maynard.”

That group mustered by Maynard became the non-profit Chateauguay Valley Community Information Services which now owns the newspaper. Graham says, “I was very happy when I heard that the Gleaner was being brought back to Huntingdon, where it began. I didn’t agree when [it was] decided to move [it] out of Huntingdon.”

Re-christened once again as The Gleaner/Le Gleaner, “The little paper that could” has been steadily proving its worth and continues to strive in its mission to provide quality community news in English and French, in both print and online forms.

Almost 160 years ago, The Canadian Gleaner gave a voice to rural people while it went to battle debating the challenges of the day, including national concerns. 50 years ago, according to former editor Judith Taylor, “The emphasis of the [Huntingdon Gleaner] was definitely the Chateauguay Valley.” In both eras, “Community news was important!”

Back in the ‘70s, Taylor recalls common questions asked during neighbourhood conversations were: “’Did you read your Gleaner?’ ‘Did you see so-and-so in your Gleaner?’” – and the key word there is “your.”

This is still the Valley’s Gleaner, and its sense of history and community, and its dedication to good journalism, remain.

JAG expands to include the whole Montérégie

How to “make” a newspaper